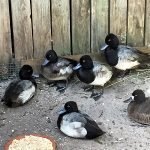 Lesser scaups recovering from red tide[/caption]As reported previously, Peace River Wildlife Center admitted more than 40 lesser scaups (bluebills) in the final days of the previous year.  In the weeks to follow, admission rates slowed, but did not stop.  We have now taken in well over 50 of these medium-sized diving ducks that have been affected by red tide.

Red tide is the common name given to an algal bloom, an unusually high concentration of aquatic microorganisms in the water, which can cause a reddish or brownish tint, especially as seen from afar.  In the Gulf of Mexico that organism is Karenia brevis, and occurrence at this time of year is not uncommon.  It is a natural phenomenon, but may be exacerbated or extended by nutrient run-off from fertilizers and other manmade conditions.

The presence of the organisms can cause a depletion of dissolved oxygen in the water, which can result in the suffocation of fish.  The algae also produce a toxin (brevetoxin) that paralyzes the central nervous system of fish, causing further disruption to their ability to breathe.

The asphyxiated fish are in turn eaten by larger fish or birds, and the toxin is bioaccumulated, or passed on to the next victim.  Brevetoxin can also become airborne as waves crash on the beach, breaking open the algae cells and releasing the toxin to become an ocular and respiratory irritant to animals and people on and near the beach.

Bivalves like clams and oysters appear to be unaffected by the toxin, but they do accumulate it.  Birds and humans can become seriously ill by eating tainted shellfish.  The scaup’s preferred diet of crustaceans, insects, and mollusks put it at risk of the effects of the potent neurotoxin.

Many of the scaups that were brought to PRWC were already dead or died soon after admission.  The neurotoxin causes an ascending paralysis.  First the wings and legs get weak, then the rest of the somatic (body) muscles get weaker until they cannot be moved at all.  When the neck can no longer hold the head above the water, many birds drown, or the bird simply stops being able to breathe.

The birds that made it to our care before they were severely affected were treated symptomatically.  Ointment was placed in their unblinking eyes.  Fluids were administered subcutaneously to flush the toxins until the birds could hold their heads up.  Then a watery diet was gavaged into their stomachs to get their body weights back up.

As they slowly regained strength, they were given physical therapy and handled carefully so as not to disrupt their waterproofing.  Eventually they were placed in outdoor habitats to prepare them for release.  Then the biggest challenge of all for us—when and where to release them.

With red tide still lingering in the area, we risked having the birds get recontaminated, but they have to be released when they are healthy again.  We checked FWC’s postings of the strength and location of red tide monitoring.  We checked the location of sightings of lesser scaups in the wild.

Luckily, we found a fresh water pond where the scaups have historically been observed wintering and a number of them have been seen recently.  Red tide doesn’t occur in fresh water, so the birds should be safe from that threat there.

One of the most difficult aspects of our job is that final leap of faith, when we release the creatures on which we have spent so much time and energy.  We hope they are fat enough and fast enough to thrive back in the wild.

The scaups we released this week looked good as they flew off over the pond.  They looked happy to be playing in the water and checking out the other birds there.  We wished them luck, hoped they would thrive, and did a little happy dance.  A really quick dance—and then we turned and went back to PRWC to start all over again with the next patients.

Due to Hurricane Ian, Peace River Wildlife Center is CLOSED to the public indefinitely.

ALL Animals and Staff made it Safely through the Storm.