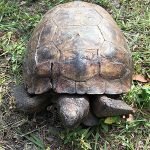 Today is the most important holiday of the year:  Groundhog Day.  While we don’t actually believe in groundhogs here in Florida (the southern extent of their native range is Georgia), we know many of our northern friends put great stock in a certain Pennsylvanian rodent’s morning ritual on this day.  Whether or not the little rascal sees his shadow, spring is just around the corner.  And while we will miss our friends when they journey back north, no one will miss the extra traffic.  Especially the tortoises.

Peace River Wildlife Center has a dozen turtles and tortoises in long-term care right now.  A few were attacked by predators (mostly dogs), some are suffering from respiratory infections (just like the rest of us), but most were hit by cars.  With their slow metabolism, it can take up to a year for a tortoise or turtle to heal from an injury.  Depending on the species, their care and diet must be adjusted accordingly.  How do we know what type of food, temperature, and humidity each patient requires?

Let’s start with a little science lesson.  Within the Kingdom Animalia (animals, as opposed to plants), Phylum Chordata (basically, having a spinal cord) is the Class Reptilia.  This Class is composed of the Orders Crocodialia (25 species-crocodiles, alligators, etc.), Sphenodontia (tuataras, a single living species found only in New Zealand), Squamata (9,600 species-lizards, snakes, etc.), and Testudines or Chelonia (400 species-turtles, tortoises, and terrapins.)

It is rather an American convention that all chelonians are called turtles.  Other languages do not seem to relish the confusion that the English language within North America stirs up with rampant ambiguity of certain words. All tortoises are turtles, but not all turtles are tortoises.  Of course, English is weird.  There are no fewer than seven ways to pronounce the letters “ough” (rough, cough, drought, dough, bought, through).  Be thankful if you learned English as a child because as second languages go, it’s a doozy.  Quit trying to distract me from the science lesson.  Sit still and be quiet; it’s almost over.

So with some 400 species, how does one know the correct way to help a chelonian (say “key-LOW-nee-an”) in trouble?  It is difficult to memorize the many breeding times, exact fit within the families, and at which stage of life a particular animal prefers water to dry land.  We could be here until next Tuesday going over the specifics of each family, genus, and species.

I can see your eyes glazing over already.  Let’s make this simple—look at the feet.

At Peace River Wildlife Center we have heard people relating the following story many times:  “We tried to return that ungrateful turtle to the water, but he just kept crawling back out.”  Upon further questioning, it is ascertained that the “ungrateful” reptile in question is a land-dwelling tortoise.  Surprisingly, they can hold their breath and walk across the bottom of a shallow creek or pond occasionally.  But if repeatedly thrown into deep water, especially the ocean, they will drown.

Obviously people are trying to be helpful.  Especially at the beach, we hear so much about sea turtle nesting (May through October.) Most egg-laying and hatching is done at night, but it is not impossible during the day to see a mama turtle who got caught up in a lawn chair that was left out, or a hatchling that got confused about which way to go to get to the water.  Hence the admonishments during that time of year to remove all items from the beach overnight, fill in any holes dug in the sand, and keep lights from shining toward the water.  But there are also gopher tortoises that live in the dunes by the beach.  Placing one of them into the water could be a death sentence.

There are four main categories of chelonians with which to be concerned.  There are sea turtles, land-dwelling tortoises, land turtles, and fresh water turtles, but only two basic differences that matter in the long run.  Does the animal spend most of its time on land or in the water?  The most obvious way to discern that difference is to look at the feet.  A turtle with flippers or webbing between the toes belongs in the water.  A tortoise or turtle with blunt feet and stout nails for digging belongs on land.

Of course there is some overlap of these areas.  Most turtles that live in the water will lay their eggs on land, so do not be too quick to help these little ladies back into the water.  You may see a gopher tortoise at the edge of the sea.  It is not known if they actually drink salt water or use it to cool down, but this sight is not uncommon.  As they walk back toward the dunes to their home burrow, please do not try to throw them back into the water.

Most gopher tortoises are rescued when they attempt to cross roads.  People wishing to help with this are advised to ensure their own safety first and foremost.  If the tortoise is not injured, simply place it a few feet away from the edge of the roadway in the direction it was heading.  If its progress is impeded by a curb or wall, try to get the animal around the obstruction to the other side and back to the direction in which it was heading as if the curb, bridge or building was not there.

Pond-dwelling turtles can be found in parking lots and on roadways as well.  These animals can be returned to the nearest water, often a retention pond.  Simply place them at water’s edge and the turtle will enter if it wants to.  It is not necessary or advised to place it or throw it into deeper water.

If you see a turtle or tortoise in its natural environment, even if it looks like a baby, and there does not appear to be anything wrong with it, leave it alone.  Tortoises and most turtles are very slow growing.  A gopher tortoise of only a few inches can be up to three years old.  Even immediately after hatching, every chelonian is precocial, meaning it is not dependent upon a parent and can feed itself.

Sometimes the best thing we can do to help the environment is to sit back and enjoy it.  If you want to take a more active role in helping wildlife in distress, educate yourself as to what is best for each species and what you need to do to keep yourself and the animal safe.  If you really want to get involved, PRWC (or your local wildlife rehabilitation facility) always needs volunteers to help in a variety of jobs.  Especially if Phil doesn’t see his shadow and our seasonal volunteers head for higher grounds.