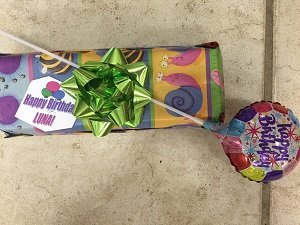 Peace River Wildlife Center is a wildlife rehabilitation facility. Our primary mission is to treat and release injured and orphaned wildlife. Secondarily, we strive to educate people about native Florida wildlife. Animals that will be released are not legally permitted to be on display to the public, but there are those that come in too severely injured to ever be placed back into the wild. Missing a wing or an eye, these individuals would not be able to care for themselves and so are provided a permanent home, in educational habitats, where they are on display to visitors.

We see over 2,000 injured and orphaned birds, mammals, and reptiles every year. Our resident numbers vary somewhat as we transfer to and from other facilities, but average well over 100. None of these residents is more unique and iconic than Luna the white eastern screech owl. We often describe Luna as leucistic, or in simpler terms that most people have heard previously, albino.

An albino has a lack of melanin, the pigment that appears as black/brown colour—although the cells that produce it, called melanocytes, are still present. Some albino animals (snakes, fish, turtles, etc.) are pale yellow or orange because they still have other pigments being produced by their melanocytes besides black and brown.

Leucistic individuals lack the cells themselves that make all pigment, because they are all derived from a single source in embryonic development. Hence, these individuals have no colour at all. This lack of pigment can occur throughout the body or may be localized, occurring in patches, also known as pied or piebald.
An albino’s eyes will appear pink or red due to the lack of pigment in the iris. The blood vessels behind the eye are usually masked by the coloured iris, but their reddish hue is seen behind the colourless iris in an albino. A leucistic animal will usually have normally coloured eyes because the pigment cells in the iris are derived from a different progenitor cell, directly within the eye.

In the case of screech owls, the normal eye colour is bright yellow. Luna’s eyes are as unique as he is. While there is no bright yellow colour in his irises, his eyes appear dark. When seen in direct sunlight, his eyes are deep red due to the visibility of the blood vessels at the back of his eyes.

The prevalence of albinism has been estimated in some species at 1 in 20,000. The chances of complete leucism are estimated at more like 1 in 100,000. It is difficult to ascertain the number of wild animals with these conditions because the usually do not survive long.

Back in April of 2013 when the white screech owl nestling originally presented, PRWC rehabilitators tried to find his nest in order to return him to it. We went back out to the Charlotte Harbour Environmental Center (CHEC) where he was found on the ground behind the visitor’s center. There was no evidence of a screech owl’s nest anywhere in the vicinity.

He may have fluttered out of the nest as fledglings often do when they are first stretching their growing wings. It is even possible that the parents and maybe even the siblings of this bird intentionally kicked him out of the nest to prevent him from drawing attention to the young family. Being such a tiny bird of prey, the screech owl’s main advantage is its camouflage. Their bark-coloured feathers allow them to blend into the tree in which they are perching.

As he grew and started to perch on the edge of the nest, he was a beckoning white flag waving to nearby predators, “We surrender! Come eat us!” This little marshmallow would quickly become the component of some predator’s s’more if left on his own.

Since this little guy’s chances of long-term survival in the wild were slim, he became an education ambassador at PRWC. Education ambassadors are permanent resident animals, those with injuries so severe they cannot be released back into the wild. They go to classrooms, festivals, and other venues to give people a hint at what happens at PRWC, and to provide an up-close experience with some of the beautiful wildlife we have in southwest Florida.

Since his birthday of April 1st falls on Easter this year, we will be celebrating Luna’s 5th birthday on Saturday, April 7th with a party in his honour at the Center. If you would like to bring a gift, he requests items for his “brothers and sisters” like raw eggs and shelled walnuts. With baby squirrel season in full swing, PRWC is seeing an abundance of young squirrels and one of the first things they start to eat when weaning is walnuts. We use cooked and raw eggs in many different diets for our residents and patients, including shorebirds, songbirds, raccoons, and opossums.

If you are lucky enough to be in the area, stop by to wish Luna a happy birthday. If you are not near-by and want to send a gift, check out the PRWC web site or our Amazon Smile wish list for direct links to much-needed supplies.

Visit Peace River Wildlife Center on April 7st to wish Mother Nature’s April Fool’s gift to us a happy birthday. Or check us out any day from 11am to 4pm, when our talented tour guides can show you around and introduce you to all our residents. If you’re not careful, you may learn something new.