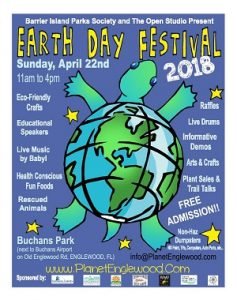 Sunday, April 22, 2018 is Earth Day, the 48th anniversary of the celebration. In 1970 the event was first observed by 20 million Americans, mostly students. Today over one billion people in 192 countries from all walks of life participate in Earth Day events, making it the largest secular observance in the world.

The goal of Earth Day is to educate people about the importance of environmental protection. Whether you believe Global Climate Change is a figment of Al Gore’s imagination or a viable threat to the future of all life on Earth, it is hard to argue that treating the planet with a little respect is a bad idea.

The theme of this year’s event aims to educate about plastic pollution. Single-use plastic items are one of the biggest threats to our environment. Plastic grocery bags, water bottles, and straws are some of the most common litter seen strewn about any neighborhood, and are especially dangerous in an area that’s surrounded by water like Southwest Florida.

Petroleum-based plastics never biodegrade by breaking down into innocuous, component atoms. Over time, plastics exposed to air and sunlight get brittle and break apart into smaller and smaller pieces until you would need a microscope to see them. Plastics that end up in an ocean or lake take even longer to break apart.

These tiny microplastic particles (less than 5mm) can be primary (the tiny beads in your toothpaste that helps whiten your teeth) or secondary (plastic fibers released every time you launder a garment made of synthetic fabric.) Often these microplastic particulates end up in the ocean and can cause harm to the creatures living there as the animals ingest the plastics, causing irritation to the digestive system, obstruction, or a satiated feeling when no nutritional substance has been eaten—leading to starvation. They also contain harmful chemicals and collect toxins that are ingested by aquatic animals.

The three R’s of the 70’s (Reduce, Reuse, Recycle) have been updated: Reduce new plastic purchases. Many plastics cannot be recycled, and recycled plastics cannot be recycled a second time. Refuse plastic drinking straws and grocery bags, bringing your own paper or cloth versions if needed. Reuse plastic containers you already have for takeout and bring your own refillable water bottle. Recycle properly for your area. Not all programs are the same—check with your local authorities. Recycling wrong is almost the same as not recycling at all. Remove and properly dispose of litter, or support organizations that do.

There are several websites and agencies working toward decreasing plastic pollution in our area and around the world. Florida Sea Grant, a program of the University of Florida’s Institute of Food and Agricultural Services (UF IFAS), is a university-based program that supports research, education and extension to conserve coastal resources and enhance economic opportunities for the people of Florida. Check them out at www.FLSeaGrant.org.

The Florida Microplastic Awareness Project (FMAP) is a citizen-science project that was funded in 2015 by an outreach and education grant from NOAA’s Marine Debris Program. They are attempting to educate people about the causes of pollution in our oceans and how we can help at a grassroots level. Learn more at www.PlasticAware.org.

Peace River Wildlife Center celebrates the principles of Earth Day every day. Our primary goal is to assist injured, orphaned or ill native Florida wildlife and get the healthy individuals back out into the wild where they belong.

Most of the harm we see is due to some sort of human-animal conflict. It may be an opossum that has been hit by a car, leaving her babies orphaned. Sometimes it is a red-shouldered hawk or screech owl hatchling that has had its nest destroyed when a tree was trimmed. It can even be the consequences of habitat loss forcing more animals into unnaturally close proximity and increased encounters with humans and their pets and cars.

This Earth Day let’s all do something totally subversive–let’s try to appreciate Mother Earth. She is pretty special. And she’s the only planet we have. For now.