Sunday, May 13th, 2018 was an exciting day for PRWC. Two patients were released back to their homes. 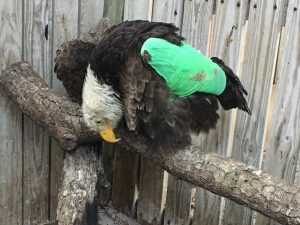 First, we were so excited to release one of our bald eagle patients this week! This adult male was found on the ground in Bokeelia on Easter Sunday and was easily contained by a resident. Our rescuer Tom Snodgrass brought it to us right away and once he got to PRWC, radiographs showed the eagle had a coracoid fracture on his left side. The coracoid is a thick bone crucial for flight and it can be tricky recovering to full flight again . With body wraps and “bed rest”, the eagle slowly healed.

We nicknamed this eagle “Tantrum” since he would sink to the ground as though paralyzed if he saw any rehabber approach. 😉. (Most eagles are very nervous around people so Tantrum’s behavior probably helped his healing process, keeping him from thrashing around in an enclosure.)

We were thrilled last week to see him flying and ready to go home! 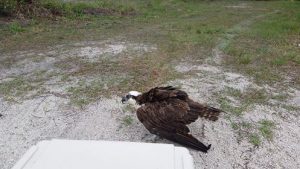 Second, an Osprey with a healed wing tip injury was released in North Fort Myers near the Shell Factory. 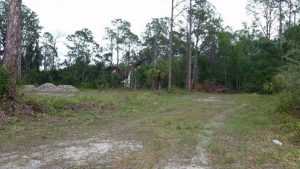