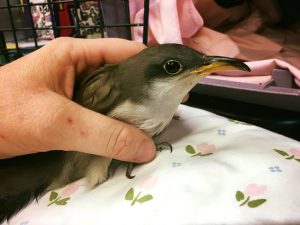 05.22.2018: In between the rainy days, we’ve been happy to release some birds back to their homes recently!

Yesterday we released this yellow billed cuckoo back to PGI after it had flown into a door. It took it awhile to get past its head trauma but made a full recovery. 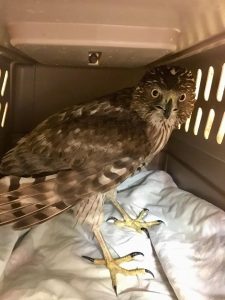 We also released a young Cooper’s hawk yesterday afternoon who had quite the tale! She’d likely had some head trauma (flew into a car or window) and was falling to the side and not standing well. On her first night at PRWC, our rehabbers heard her vocalizing in distress. They found her trying to lay an egg! They assisted her with passing the egg, since the trauma may have impaired her ability temporarily and she seemed stuck. During her stay she also refused to eat and had to be tube fed or force fed nutrition. Within less than a week though the hawk who couldn’t pass an egg was flying and bouncing off the walls of a flight cage! At release she took off immediately, home to her mate!

Thank you for your continued support for patients like these.