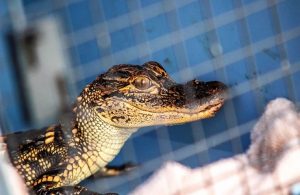 “The only thing we have to fear, is fear itself.  And spiders.”  That’s a direct quote from Franklin D. Roosevelt from his first inaugural address to the nation in 1933.  He might have forgotten to actually say the bit about spiders, or maybe historians abbreviated the speech to fit the sound bite for the evening news.  But FDR seems like an intelligent man, so I’m sure he was aware that spiders are innately evil.  Unlike alligators.

Peace River Wildlife Center recently admitted a young American alligator.  At 2.5 feet long, the juvenile is approximately two to three years old.  They grow at about one foot per year until they start to mature, depending on food availability.

Mating season starts in April in Florida.  The average clutch size is 38 eggs.  Of those, only 24 survive to hatching and only 10 make it to their 1st birthday.  Eight of those make it to sub-adult (four feet) and five live to maturity (six feet) to begin breeding themselves.  It can take males up to 12 years to reach this size and females up to 15 years.  When population density increases in a specific area, these survival rates are reduced due to increased predation and cannibalism.

In the wild the average alligator lifespan is 35 to 50 years.  Females are usually less than 9 feet, while the record for a male alligator is over 14 feet.  They can lunge at up to 20 mph, but only for a very short distance.  The myth that when running from a gator one should use a zig-zag pattern is just that—a myth.  If you have to run from a gator, just run.  Or better yet, avoid any circumstance when that would seem to be your only option. 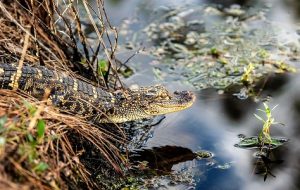 Most human-alligator encounters are due to human ignorance or lack of empathy, and end poorly for the gator.  Sometimes there’s a bad result for that human as well, but unfortunately, more often for a different person altogether.  It is vital that people not feed gators, as it habituates them to humans, making them associate people with food.  It emboldens them to not flee from humans or even to seek out their company.  While it may seem like a hoot to feed an alligator a marshmallow, it won’t be funny at all when the next thing that same gator tries to eat is a poodle— or a child.

Alligators are more closely related to dinosaurs, and hence birds, than other reptiles, although that is their taxonomic designation.  Their little dinosaur brains cannot make complex computations, so it is up to us humans to at act like the more evolved species.  Although many people are afraid of alligators, a more realistic approach is to have a healthy respect of them.

The people that found PRWC’s patient on the side of the road did not hesitate to bundle him up and bring him to us for the care that he needed.  He had suffered head trauma and was practically comatose at the time.  Amusingly enough, we have calls every day from people afraid to handle even a nestling dove for fear of being injured, but these brave souls brought us an alligator.  Kudos to them!

He surely would have died on the side of the road had they not intervened.  As it was, after a few days of rest and recuperation and some medication, his mentation improved, and he was able to be released back to the general area from which he came.  He had some abrasions on the top and bottom of his jaw, but it was determined that they would not deter him from eating, and it is better to get an alligator back into the wild as quickly as possible, so we don’t habituate them to people while in our care. 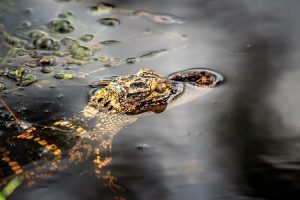 During the alligator’s release, I did discover an interesting fact about myself.  Now, don’t pay any attention to anyone who happened to be there to provide photographic evidence of the release and tells you I am afraid of gators.  I do have a healthy respect for them and remove them from a travelling kennel with an abundance of caution.  What I did discover was a new religion.  I am arachnocatholic.  Looking for a good location to release the gator, I walked through numerous spiderwebs and genuflected, furiously making the sign of the cross each time.  I eventually found the perfect spot along a stream with plenty of overhanging brush where the kiddo could hide from bigger gators that might want to have him for lunch—and not in a good way.

I was looking for another sagacious FDR quote to close this, but most of them sounded dismissive of the current regime, and not wanting to turn this into a muckraker’s diatribe, I found a quote with which we all can agree.  “What America needs now is a drink.”  Especially after expending a lot of energy being more afraid of filamentous spider silk than toothy reptiles.