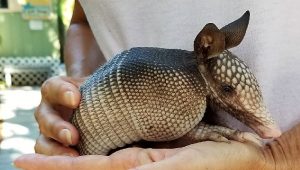 Peace River Wildlife Center has a new education animal—a nine-banded armadillo. Our new resident’s name is Bodhi (pronounced BOH-dee) and is short for Bodhisattva.  Bodhisattva is a Sanskrit term for someone who delays personal nirvana for the enlightenment of others.

Although often misunderstood and surrounded by myths and falsehoods, armadillos make good neighbors.  Bodhi is going to delay his return to the wild to help people come to a better understanding about the “little armoured ones.”

While armadillos are native to South and Central America, they have been in Florida since the early 1900’s, either having made their own way across the panhandle or via intentional introduction.  They are considered naturalized in Florida at this time, not invasives, since their numbers have not increased dramatically and they don’t harm any of our native species.  They were used as a food source during the Great Depression and allegedly taste like—wait for it—pork.  I’ll bet you thought I was going to say chicken, didn’t you? 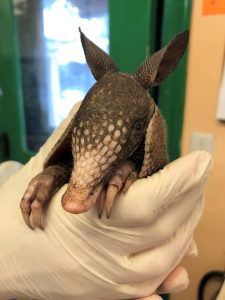 Let’s talk about the elephant in the room first and get that over with:  Leprosy.  Most people have heard of it, but honestly have no idea, other than the reference as a biblical plague, what it really means.  Leprosy or Hansen’s disease is a slow growing bacterial infection (Mycobacterium leprae) of the nerves, skin, eyes, or respiratory tract that can go undetected for up to 20 years.  In the past, it could result in the inability to feel pain and lead to loss of body parts due to repeated injuries or undetected wounds.

As an old testament scourge, it was pretty heady stuff.  Now there are tests and treatments for it in modern societies.  And whom can we thank for that?  A scientist named Hansen (wouldn’t you love to have a hideously disfiguring disease named after you?!) and his lab “rats,” the armadillos.  With their low body temperature, they are one of the only other organisms known to contract leprosy and were intentionally infected by us to be used as a model for treatment and cure.

Rough estimates of up to 20% of armadillos may be naturally infected, but few of those animals live long enough to become symptomatic or infective.  Luckily, 95% of the human population is not even susceptible to the disease.  And the only known cases of transmission from armadillos to humans is from eating improperly cooked meat.  So, if you’re serving up “possum on the half shell,” be sure to cook it thoroughly.  Or better yet, try a tofu burger.

Aside from stocking your pantry, what can armadillos do for you?  They are fascinating creatures.  As omnivores, they eat just about anything available, including carrion, but 90% of their diet is composed of insects.  As they dig through a healthy lawn, they aerate the soil and remove plant-damaging insects.  They are one of the only species that can eat fire ants without sustaining injury from the insect’s venom.

Armadillos are susceptible to cold and heat.  They don’t hibernate and have a low metabolic rate, so are not found outside of the temperate zone.  They also can’t handle the heat, and are usually active in Florida only at night, especially during the summer.  They sleep up to 16 hours a day in one of the many burrows they may have in a given territory and spend most of their waking hours in search of food.

As with most burrowing animals, they have poor eyesight.  They do have an acute sense of smell and can detect insects up to nine inches underground.  They use their long, sticky tongues to gather up ants and termites, much like their relatives the anteater.  They have a few peg-like molars, but those teeth have no enamel and so are quite soft.

An armadillo can cross a narrow body of water by holding its breath for up to six minutes and walking across the bottom.  Or it can “swallow air,” inflating its stomach and intestines for buoyancy to swim across a wider body of water.

It has dermal plates on its back for protection.  While this thick leathery covering is not firm enough to deter predators like coyotes or dogs, it does protect the armadillo from thorns and briars as it dives under cover.  It can also use its strong legs and claws to quickly dig underground.  The soft belly has a few fine hairs that are used for sensory input like a cat’s whiskers.

The armadillo’s only real defense mechanism is its ability to jump.  Being nearly deaf and blind, it often finds itself quite close to a predator before it realizes the danger.  It will then leap three feet in the air to startle the predator, giving the armadillo time to run away.  This works fairly well against a dog.  Not so much against a Dodge pick-up trying to straddle one in the middle of a road on a dark night.

Adult armadillos are solitary animals about the size of a cat, 15-17 inches long, plus another 15 inches for the tail, and weigh 8-17 pounds.  They usually live 5-7 years in the wild and up to 15 years in captivity.  They mate in late July in Florida, with the young normally born in February or March.  The five-month gestation can be delayed up to four months while mom waits for the appropriate conditions.  Once the fertilized egg has finally implanted, it splits into four identical quadruplets.

Our buddy Bohdi was found lying on a lawn in the direct sun.  We don’t know how he got separated from his mother and brothers.  He was overheated, dehydrated, and close to death.  He has since recovered nicely and is ready to begin his career as one of PRWC’s education outreach animals.

Watch for him at an event near you and see how much you have in common with this fascinating creature.  He enjoys earthworms, grubs, and long, snuffling walks in anthills.  Okay, so maybe you don’t have much in common with him, but more like an appreciation for all that he and his kin can do for us.  Or at least allay some of the fears and misunderstandings that plague this prehistoric-looking mammal.