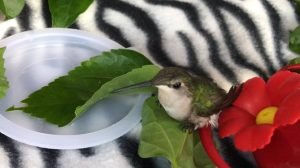 Stop me if you’ve heard this one before:  A frog leaps up and snatches a hummingbird in mid-air.  Anyone?  While it does evoke an amusing image, it’s not a joke.  It actually happened recently, according to Lance Simmons, the guy who brought the harassed hummingbird to Peace River Wildlife Center.  He swears he was sober at the time he witnessed the assault (but he is a City of Punta Gorda employee, so we wouldn’t hold it against him if he wasn’t.)

Last year PRWC admitted 2,443 patients.  Of those, there were 113 different avian species.  Many of them were the same or similar types of birds, eating pretty much the same types of foods and requiring similar habitats.  Occasionally though, we get an outlier.

Earlier this year we had a hatchling limpkin.  That species feeds primarily on apple snails.  It is hard enough to wean any baby bird from a hand-feeding formula to self-feeding, but it is almost impossible when their diet is so restricted.

To have the best shot at keeping this kiddo alive, I found myself mucking about in roadside drainage ditches, pealing snails off rocks and plopping them into a bucket.  Luckily for me, I had noticed the snails on earlier walks near the area.  What caught my attention was the rough pink masses on numerous reeds growing out of the water.

I had no idea what they were, so I did what any computer illiterate person would do.  I texted a picture to the one person I know who knows everything, and he didn’t let me down.  Within minutes Capt. Josh, our esteemed WaterLine editor, informed me that the pink biomass was an egg cluster from the highly invasive channeled apple snail.

Filing that information away, I went on about my walks and work at PRWC.  Amazingly enough, a few months later when we got the limpkin in and we needed snails to feed it, I remembered just where I could find an abundant supply.  And since these are an invasive species, I didn’t feel bad about harvesting them. 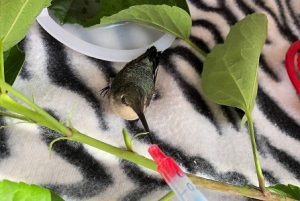 My only concern was whether the native birds would eat this cousin of the indigenous apple snails we have in Florida.  That query was answered when I got to the swale and had to fight off a mixed flock of egrets and herons to get to the few remaining intact snail shells.

Fast forward to a few days ago when the hummingbird arrived.  We don’t get hummers as patients very often.  This may be only the second or third one I’ve seen in the 14 years I’ve been at PRWC, so we didn’t have the needed supplies on hand to feed and care for the little guy.  The feeder and nectar we used to have had been tossed after years of sitting on a shelf had turned them brittle, dried-up, and unusable.

We do have some awesome contacts around the state and country with other rehabbers who see and treat this species more frequently than we do.  Since we didn’t have hummingbird nectar, they recommended we use sugar water as an emergency ration.  Trouble was, we didn’t have sugar either.  We have Karo syrup and agave, but we were told these are not acceptable substitutions.  “Borrow a cup of sugar from your neighbor,” was the helpful suggestion.  What are we, in an episode of Bewitched?

Since don’t have a Mrs. Kravitz to borrow household staples from, someone had to make a store run.  The rehabbers were busy taking care of our patients.  The receptionist was answering the phones that never stop ringing.  I was trying to get caught up on the never-ending paperwork and check on the more critical patients.  But this hummingbird was going to fall into that critical category if we didn’t get him some sustenance soon.

As I was running out to my car, a couple were making their way across the parking lot toward the entrance to PRWC.  They asked what we needed.  Assuming it was a casual conversation starter, I gave them the short list of items we always need:  Paper towels, laundry soap, bleach, fresh greens, fruits, and vegetables.  Then I jokingly mentioned what we really needed right now was hummingbird nectar and a feeder.

I was amazed when this wonderful couple turned around and headed out to the store to purchase exactly what we needed right then and there.  Kathy and Allen Feister bought us the perfect hummingbird feeder and undyed nectar that we needed for this patient.  (And probably for the next 20 years, we see so few of them.)  They also bought us everything else I had mentioned and a few other items I had forgotten, but they knew we would need:  Dawn dish soap, kitchen gloves, and cat food.

The hummingbird is recovering from her odd encounter with the frog.  Maybe she was disappointed that he didn’t turn into a prince, but her prince turned out to be Mr. Simmons when he saved her life by rescuing her.  And her fairy god parents, Mr. and Mrs. Feister, did their bit to help us keep her alive.  Now only time will tell if she can stay strong enough to get to the happily-ever-after release back into the wild. 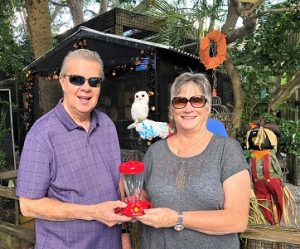 Update:  The hummingbird has been successfully released back into Mr. Simmons yard, where he grows numerous plants that attract this colourful species.  Hopefully Mr. Frog has learned a valuable lesson that  he’s going to need a smaller saddle or a larger carrier for his next flight.