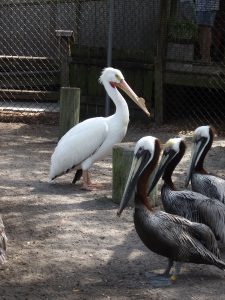 Peace River Wildlife Center admitted this American White Pelican on January 5, 2015. He was brought to us by one of our senior rescuers, Mark Kramer. Big Mac came to the center with a wing injury in which was almost had a traumatic self wing amp. Dr. Robin surgically finished the amp as there was no way to save the wing. Big Mac is named after our long time volunteer Pelican feeder, Mac McElwee.

The White Pelican does not dive for fish as the Brown Pelican does. Instead, it dips its head underwater to scoop up fish. Several pelicans may fish cooperatively, moving into a circle to concentrate fish, and then dipping their heads under simultaneously to catch fish.