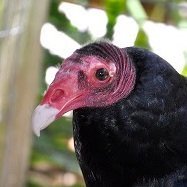 Lucy the Turkey Vulture is a female and our oldest resident, admitted on December 26th, 1989. She was hit by a car near the Ranger’s Baseball Stadium (now Tampa Ray’s) on SR 776 in Murdock. Her left wing had to be completely amputated. She is enjoying her retirement these days.

The Turkey Vulture uses its sense of smell to locate carrion. The part of its brain responsible for processing smells is particularly large, compared to other birds. Its heightened ability to detect odors’ it can detect just a few parts per trillion; allows it to find dead animals below a forest canopy. The Turkey Vulture maintains stability and lift at low altitudes by holding its wings up in a slight dihedral (V-shape) and teetering from side to side while flying. It flies low to the ground to pick up the scent of dead animals.