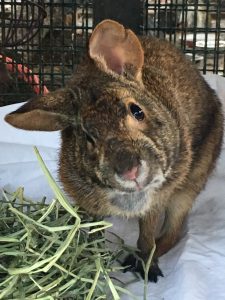 Marshall the Marsh Rabbit was admitted to PRWC as an adult in 2015 after he was struck by a vehicle. He was neurological and “gator rolling”. After treatment, he improved enough to the point that he didn’t gator roll as much, but with a permanent head tilt and gator rolling when stressed due to his head trauma, he is not a good candidate to be released back to the wild.

The marsh rabbit is a small cottontail rabbit found in marshes and swamps of coastal regions of the Eastern and Southern United States. It is a strong swimmer and found only near regions of water. It is similar in appearance to the eastern cottontail but is characterized by smaller ears, legs, and tail.

Source: from Wikipedia, the free encyclopedia