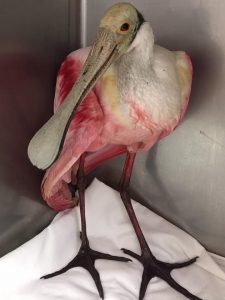 Spork the Roseate Spoonbill was transferred to us by our friends at the Wildlife Center of Venice. They had admitted the adult male bird with an old healed fracture of its wing. The broken bone had already fused, but the bird is unable to fly. Since they do not have the luxury of exhibit habitats at their facility, they offered to transfer the bird to PRWC.

The oldest recorded Roseate Spoonbill was at least 15 years, 10 months old when it was recaptured and re-released during a scientific study in Florida.