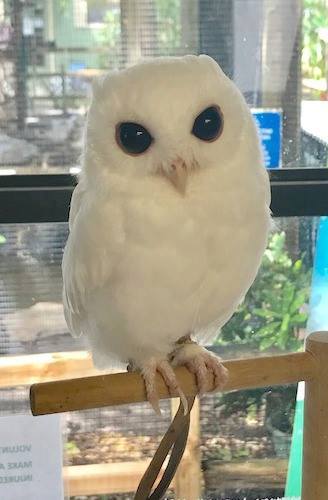 Ambassador Luna the white Eastern Screech Owl is Peace River Wildlife Center’s most iconic Ambassador. This little guy is not an albino, but is leucistic. An albino has a lack of melanin, the pigment that appears as black/brown color; although the cells that produce it, melanocytes, are still present. Some albino animals (snakes, fish, turtles, etc.) are pale yellow or orange because they have different pigments being produced other than black and brown.

Leucistic individuals lack the cells that make all pigment throughout their bodies, because they are all derived from a single source in embryonic development, and hence have no color at all. An albino’s eyes will appear pink or red due to the lack of pigment in the iris. The blood vessels behind the eye are usually masked by the colored iris, but their reddish hue is seen behind the (clear) iris in an albino. A leucistic animal will usually have normally colored eyes because the pigment cells in the iris are derived from a different progenitor cell, directly within the eye.

When originally presented to us as a nestling, we tried to find his nest in order to return him to it. We went back out to the Charlotte Harbour Environmental Center where he was found on the ground behind the visitor’s center. There was no evidence of a screech owl’s nest anywhere in the vicinity that we could see. It is entirely possible that the parents and maybe even the siblings of this bird intentionally kicked him out of the nest to prevent him from drawing attention to the young family.

Being such a tiny bird of prey, the screech owl’s main advantage is its camouflage. Their bark-colored feathers allow them to blend into the tree in which they are perching. As he grew and started to perch on the edge of the nest, he was a beckoning white flag waving to nearby predators, We surrender! Come eat us! This little marshmallow would quickly become the component of some predator’s s’more if left on his own. Since this little guy’s chances of long term survival in the wild were slim, he became an educational ambassador at PRWC. Our education ambassadors are permanent resident animals that go to classrooms, festivals, and other venues to give people a hint at what we do here at PRWC.

Be sure to stop by the Screech Owl Habitat and see “Luna” on your next visit.

Like most raptors, male Eastern Screech-Owls are smaller than females, and are more agile fliers and hunters. The female doesn’t hunt while on the nest; she and the chicks depend on food brought them by the male. Though the male is smaller, his voice is deeper than the female’s.

Smaller birds can help you find screech-owls during the day. Listen for a commotion of Blue Jays, chickadees, and titmice;  they may be mobbing a screech-owl (or other raptor), swooping around it with noisy calls. This can be enough of a nuisance to make the owl move on, and it alerts other birds to the predator’s presence and teaches younger members of the flock about the danger.

Screech-owls regurgitate the bones, fur, and feathers of their prey in an oval pellet, usually once or twice a day. The ground beneath habitual owl roosts can be littered with pellets, and you can learn a lot from them about the owl’s diet. However, data from pellets may underestimate the number of soft-bodied animals, like worms and insects, the owl has eaten. Nestling Screech-owls fight fiercely among themselves for food, and sometimes even kill and eat their smallest sibling. 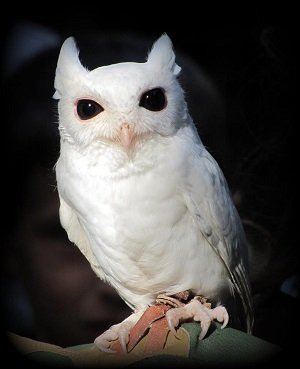 Rufous owls are more common in the East, with fewer than 15% red at the western edge of the range. No red owls are known from southern Texas, although they occur further north in Texas and further south in Mexico. Intermediate brownish individuals also occur in most populations.

Eastern Screech-Owl pairs usually are monogamous and remain together for life. Some males, however, will mate with two different females. The second female may evict the first female, lay her own eggs in the nest, and incubate both clutches. The Eastern Screech-Owl is known to eat a variety of songbirds, including the European Starling. Despite this fact, the starling regularly displaces the owl from nesting sites and takes over the hole to raise its own brood.