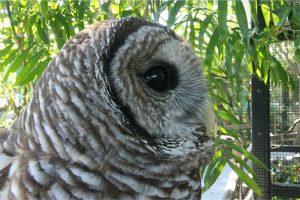 Ambassador Orion is a Barred Owl that fell out of his nest and into a woman’s yard in the winter of 2016. She called the Wildlife Center of Venice who responded and put him back up into his nest. After seeing how cute the baby was, the woman began visiting the nest regularly. She would call him down and feed him causing him to become imprinted to people. When she finally called WCV again, they recognized that he was imprinted and deemed that he would not survive successfully in the wild. They brought him back to their Center and contacted PRWC to find a permanent place for him to live.

The belly feathers of some Barred Owls are pink. This coloring may be the result of eating a lot of crayfish. Barred Owl populations have expanded westward in the last century, where the more aggressive Barred Owl may displace the endangered Spotted Owl. Hybrids of the two species are also known. The Great Horned Owl is the most serious predator threat to the Barred Owl. Although they often live in the same areas, the Barred Owl will avoid all parts of its territory occupied by the Great Horned Owl.